The knowledge of Transcendental Meditation has been made widely available in the world today by Maharishi Mahesh Yogi.

Maharishi received the technique from his teacher with whom he studied for many years, before inaugurating an international organisation to spread the knowledge of Transcendental Meditation globally in 1957. Maharishi first came to the UK in 1959. 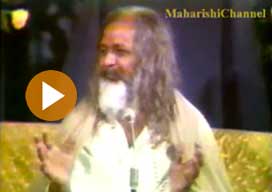 Why I left the Himalayas - Maharishi (5 mins)

Establish life according to Natural Law

Maharishi also completely restored the thousands-of-years-old scattered Vedic literature restoring the true significance of its theory and practice, organising it in the form of a complete and systematic science of consciousness.

Maharishi's practical programmes quietly establish life according to Natural Law without requiring change in any area of endeavour, to irrevocably change the course of time in favour of peace and happiness for all mankind.

David Lynch, Filmmaker and Founder, of the David Lynch Foundation for Consciousness Based Education and World Peace:

"I have been diving within through the Transcendental Meditation technique for over 30 years. It has changed my life, my world."